There are a lot of bars in Bruges, and it can be quite difficult to know where to start! Our first trip began with two thirsty Brits wandering into the first bar we could find- a bland establishment obviously reaping the benefits of being in such a busy touristy city without putting any effort in to retain it’s customers, with a beer menu featuring 5 or so common Belgian ales, a Pils on draught and a tiny dish of Bombay mix style snacks plonked down with your beer which may or may not be served in the proper glass. There are a lot of them out there unfortunately. There are also a lot of brilliant bars with huge, constantly evolving beer lists. These places embrace the history of Bruges and Belgian beer. They are usually packed full of locals as well as tourists, and you can sometimes struggle to get a table (most of them refuse to serve you without a seat). The staff are always knowledgable and willing to help you choose something you’ll like.

All of the below bars are decent authentic Belgian bars (well, sort of in the case of Le Trappiste) and all serve their beers in the correct glass. 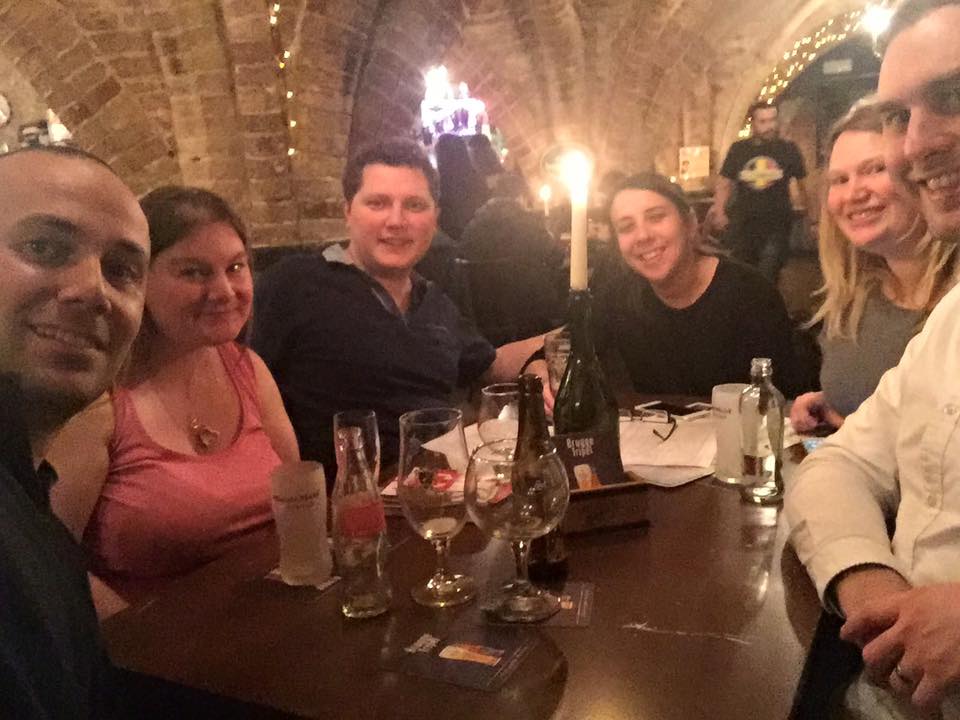 Le Trappiste has an interesting history. It was originally a Belgian beer bar in Altrincham, UK run by Brits. After a few years of trading in England, owner Martin Matthews decided to relocate the bar to it’s “spiritual home” and moved over to Bruges in 2013. Since then the bar has gone from strength to strength, showing that when it comes to authentic Belgian bars, the Brits can give the Belges a real run for their money!
Le Trappiste is a specialist beer bar just off Markt Square in Bruges. It is located in a cellar which is apparently 800 years old. The Beer Menu features over 100 beers, including international beers. Its a beautiful old cellar with a vaulted ceiling, fairy lights and candles on the tables. It has a really friendly, cosy feel about it. There’s a great atmosphere and the serving staff really know their beers.
Food is the typical Belgian “tapas”- cheese, meats and mustard.
Opens late and often has live music playing. Gets very busy at peak times! Here we are at New Year when we last visited. Notice how I (the blond on the right) was only drinking mineral water- I was 6 months pregnant but Carl’s arm hides my bump! In fact, looking at the photo there is a disappointingly low amount of beer there! We must have just had the table cleared! Not like us at all! 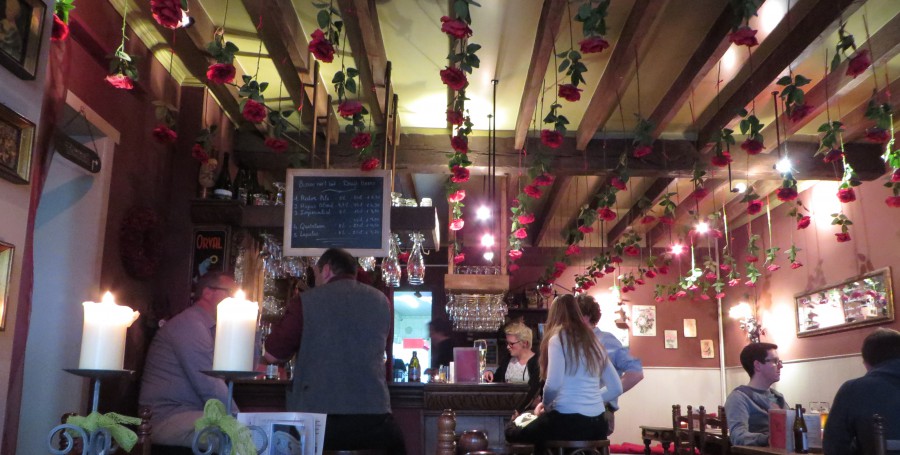 Cafe Rose Red is tucked away on a quiet side street in the centre of Bruges. It is part of Hotel Cordoeanier so for some reason I always expected it to be a bit fancy and unwelcoming. I was totally wrong. It has a lovely little courtyard out the back and inside is just beautiful, with wooden furniture, candles and its namesake red roses hanging from the ceiling. Still, the atmosphere is laid back and friendly, and although it was always busy when we visited we still always managed to get a seat.

The general manager Kris Veireman is a passionate beer drinker and the beer menu reflects that, with over 120 beers to choose from. They also specialise in Trappist beers. It pleases everyone: a romantic setting for the ladies and a good selection of beers for the men! Limited “tapas” bar snacks. Friendly and knowledgable staff. Renowned for their 4 beer sampler which is well priced, €10 (though that price may have gone up). 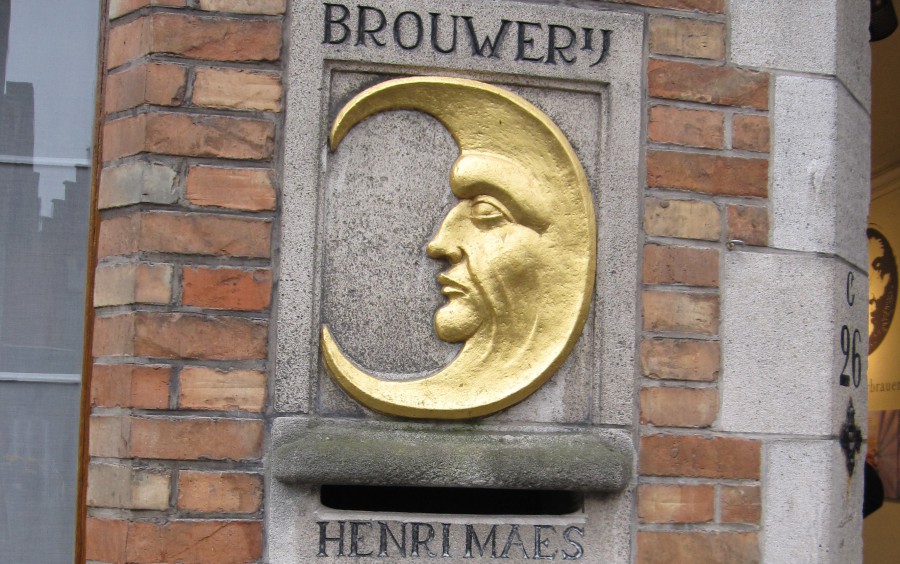 The Halve Maan Brewery has not had an easy past- originally opened in 1856 by Leon Maes and passed down to Henri II and his brother Achere who both died young. Their widows kept the brewery going through the First World War at a time when there were over 30 brewhouses in Bruges. The brand was bought out by the Riva Breweryin 1988, who made the Halve Maan stop brewing it’s Straffe Hendrik beers when they decided to start making it themselves. Undefeated, a young son of the family Xavier Vanneste started to brew a new Brugse Zot beer in 2005, and found huge success. His success was so great that in 2008 the brewery was able to buy back their brand when Riva went under- and they regained the rights to its own Straffe Hendrik beer, brewed following the original recipe and methods.

The restaurant part of the brewery is based in the former bottling hall of the original brewery and okay, so we go on about this place a lot. But what’s not to love? We’ve had many lovely times here. The food is really good, usually incorporating some sort of beer into the meal. The beer menu is obviously limited to the Halve Maan’s own beers, but they’re pretty good so its no big deal. They also have some unusual vintage versions of their own beers, which come with a price to match.

Hint: Don’t buy any souvenir beers here, it’s a tourist destination and is priced as such. The Bruges supermarkets always have a good stock of the Halve Maan’s beers- last time we went they even had the vintage Straff Hendrik at a fraction of the price we paid to drink it in the brewery! But its somewhere you just have to go when in Bruges– do the tour, have a beer and have a meal. You won’t be disappointed. My mum always said I like the food in this place so much because I always ate it after having sampled a few of the beers… then we took her here and she changed her mind!

We love this place. I can’t remember how we first found it, but it was one of the first places we went to on our very first trip to Bruges. I chose it to go to for lunch on my 30th birthday, it was the host of the one beer I allowed myself during the trip as a preggo. Oh Cambrinus, we love you.

Cambrinus in known as the King of Beer in many European countries, said to have invented the Brussels Faro and lambic beers- and is therefore said to have invented beer. What a legend! The building itself shows him in two places: in a statue as part of the facade and as a stained glass window. In both places he is sitting on a barrel of beer.

The building itself dates as far back as 1699, and has been through many names.

The beer menu is epic. It’s a wooden bound Bible to beer. You don’t get to keep it for long, the waiters come and take it to the next table as soon as you’ve ordered your beer (unless you’re in a big group and hide one! Mwah ha haa! What? We needed to prepare for the next order!). Cambrinus stocks over 400 beers, and if you’re overwhelmed, unsure or a pure novice the waiters will talk you through what sort of thing you like and help you pick something.

The food is always really good too. Book a table or arrive early. We once got literally the last table free in the whole place, and enjoyed sitting in our window seat watching people spend a good 10 minutes reading the menu, talking about what they’ll have, then coming in only to be told it’s full.

Cambrinus is a place we always go back to. Every time.

Other places that deserve a mention…

These are a few places we always put on our itinerary but have never quite got to for various reasons, but we’ve heard they are worth a visit and will probably eventually work their way above this subtitle to make it to the main article!

A slight lie, we have technically been here a few years ago, but it was so packed we had to leave without having had a drink! Tucked away down a tiny alley. 130 beers, including a house speciality on draught- Tripel van De Garre.

Meaning The Monk’s Hole, referring to the cellar-based location of the bar. Vaulted ceilings. 75 beers. No food. Closed during the day.