While in Antwerp we visited Kulminator: a lovely bar which specializes in matured beers. Their beer menu is huge, and many of the beers have a variety of ages listed: the older they are the slightly more expensive they get. Wanting to try something different but not splurge too much I went for a 12 year old Westmalle Dubbel (2003). Carl ordered a matured Orval.

All the matured beers are kept in a variety of cellars so it took a little while for the sweet older owner to go and retrieve our orders, which apparently were in SEPARATE cellars!

The Westmalle Dubbel is a popular dark Belgian trappist beer with an alcoholic volume of 7%. It has been brewed by Brouwerij der Trappisten van Westmalle since 1926, who also brew (unsurprisingly) the Westmalle Tripel and Westmalle Extra.

The Dubbel is presented in a dark brown bottle with a diamond-shaped chocolate brown label. It is usually served in a 330ml bottle, but can also be found in larger 750ml bottles and sometimes on tap too. 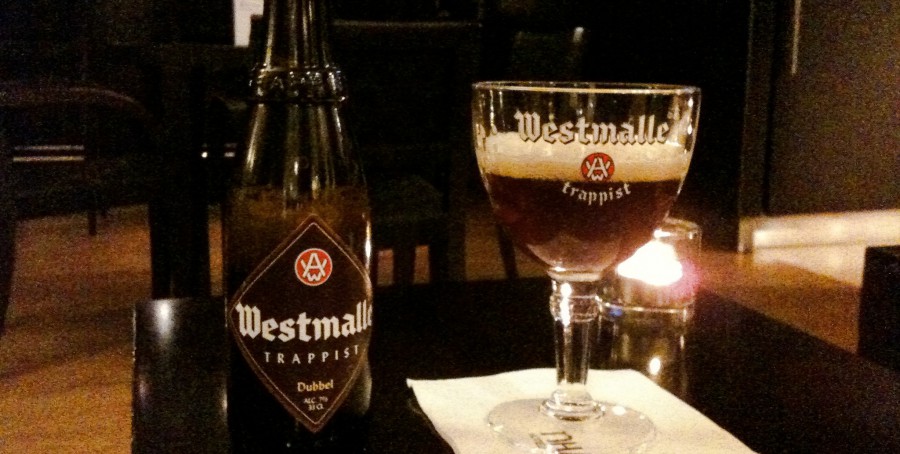 Faint tastes of caramel and dried fruits. It’s not too heavy in taste and is quite smooth, but also slightly tart. The taste develops slowly into a dry, slightly spicy lingering aftertaste which is quite pleasant.

I would rate the Westmalle Dubbel a solid 7 out of 10. Not my favourite beer but still pleasant and enjoyable to drink.

The bottle I received was from 2003, with a best before date of 3rd February 2006. It was in near perfect form (as opposed to the dusty, dirty 2006 Orval that Carl had ordered!) and if I hadn’t known what I’d ordered I wouldn’t have suspected it was a vintage! Having now refreshed my mind with the appearance if it’s contemporary, I can now see that although the bottle is unchanged and the label is similar, the vintage label is square as opposed to diamond shaped, and the layout has been altered to suit the different shape.

The vintage Dubbel pours much the same colour- possibly darker but that could have just been my imagination. The large frothy head has pretty much disappeared and immediately the smell of the beer is intenser and much more treacly.

To taste the vintage beer is much thicker. The overwhelming flavours are treacle and liquorice, with the caramel and fruit taking a step into the background. Syruppish is the word that springs to mind,if that’s even a word.

The flavour doesn’t linger for so long either. I’m surprised how different a beer can become when the only added ingredient is time. Simultaneous to this feeling, I can still tell the beer is a Westmalle Dubbel: it’s not completely different… like it has the same basic flavours, they’ve just been rearranged and given different priorities.

I was surprised by the vintage Westmalle Dubbel, possibly even a little taken aback, but after a few sips realised I quite liked it.

I would rate the aged Westmalle Dubbel a treacly 8.5 out of 10.